Posted on March 4, 2018 by dreamseadesigns 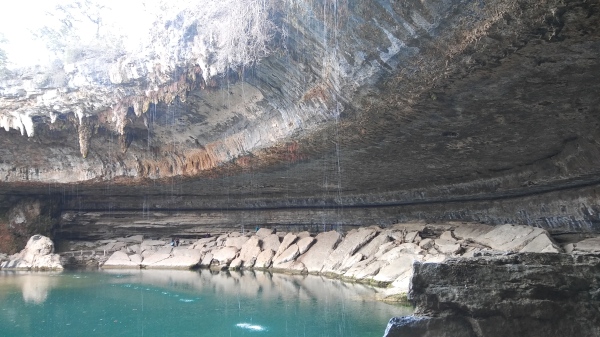 Hamilton Pool is a natural swimming hole about 30 minutes away from Austin, Texas.  Located in Dripping Springs, the preserve has forests that look like the jungle, lots of wildlife, several trails, rocks to climb on, a waterfall, and a river.  That’s why, on our one Saturday in Austin, we chose to go to Hamilton Pool.

In the summer, it gets super busy and you have to make reservations far in advance.  When we went in February, it was cold but the parking lot was still pretty much full.  The ability to swim is determined by the amount of rainfall and the bacteria levels.  There are no concessions in the preserve, so bring your own water.  Pets are prohibited (you can’t even leave them in your car) and there is no lifeguard on duty, SO SWIM AT YOUR OWN RISK. Alcohol and glass bottles, containers and other related items made of glass are prohibited.  Drones will be taken out of the park.  Cooking, camping, guns, bikes and fires are banned. 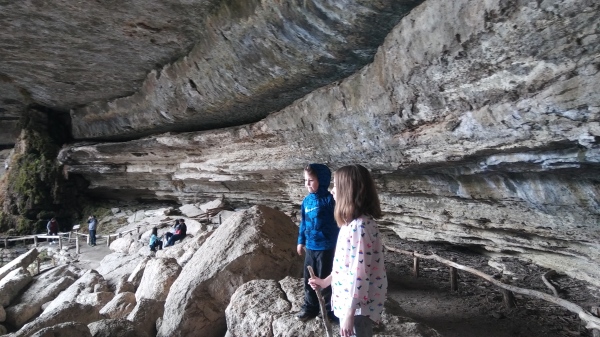 The trail to Hamilton Pool is about a quarter mile.  At the beginning of the trail, there are free walking sticks – take one, the trail is steep (return it when you’re done)!  When you get down to the bottom, you can head right to the pool, or take the river trail to the left, which is an extra 6/10 of a mile.  The view is absolutely astonishing.  The pool is under an overhang and has a path going under, but along the edges of the pool.  You can swim, climb rocks that are on the trail, and follow the trails.  The water can get really cold in winter.  I went in and the water was FREEZING!

A variety of wildlife (including the golden-cheeked warbler and other birds), lush plant life, and rock shelters brought Native Americans to the area 8,000 years ago.  Before the 1800’s, Tonkawa, and Apaches lived there.  The family of one of Texas’ governors owned the property in the 1860’s, but then the Reimers bought it in the 1880’s.  There’s a story about the Reimers’ 8-year-old son finding the collapsed grotto.  The collapsed grottos and canyons were formed by thousands of years of water erosion.  The Reimers opened the pool to the public for recreational use.

Hamilton Pool Preserve is completely awesome in every way.  These pictures will hopefully show you the natural wonders of Hamilton Pool that I can’t find words to describe.  I hope you decide to come to Hamilton Pool.  It’s a wonderful place!

To see more about our trip to Hamilton Pool, watch the video below!

This entry was posted in Places We've Been and tagged homeschool, nature, Texas. Bookmark the permalink.